Last Sunday Carperformance joined the Autovisie Time Attack with the IMT Skyline. Unfortunatly without the new injectors so with 350 BHP and 1300 kg, I get me a new target:
2.00 sec instead of 1.55 sec per lap. We changed the set up; very agressive camber in the front and more caster + 3 degrees camber at the back which is normaly 0 degrees for drifting.

During the warm up the car felt very stabile and the new brakes were great with 2.05 as fastest time. We had some problems with the noise and also 7000 RPM was to much for the standard injectors, so we put the ref limiter on 6250 RPM. Actually very funny, organising a Time Attack and politcial Netherlands puts the max DBa at 89! Anyway, the solution was to lift the gas a few seconds after the turn "Bos uit". I won 3 seconds at the turn "Scheivlak", but lost 4 seconds at the straight at start-finish, so a 2.06 was the maximum. This results means the 10th place in the most competive division called Pro non Street and we were quit happy.

There was also drifting for NL Invitationals. A fifth place in qualification, an easy battle in the 1/4 final, some damage at the car because a drifter hit me during the warm-up lap in the 1/2 final and funny enough no chance to battle against Kees Kok for the 3rd place. The organisation decided to give Kees Kok the 3rd place. Anyway, the Time Attack was great and the drifting was a nice extra.

We had good fun, the crowd and the press loved the IMT Skyline, lot's of new contacts and 4 potential new sponsors and also very important, the car is getting better and better, had become very reliable, so we are ready for probaly one of the best driftevents this year, the Japan vs. Germany battle at Zolder during the GO FAST X-days at the 10th of June.
Gepost door Joep DK op 8:09 a.m. 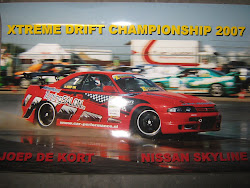